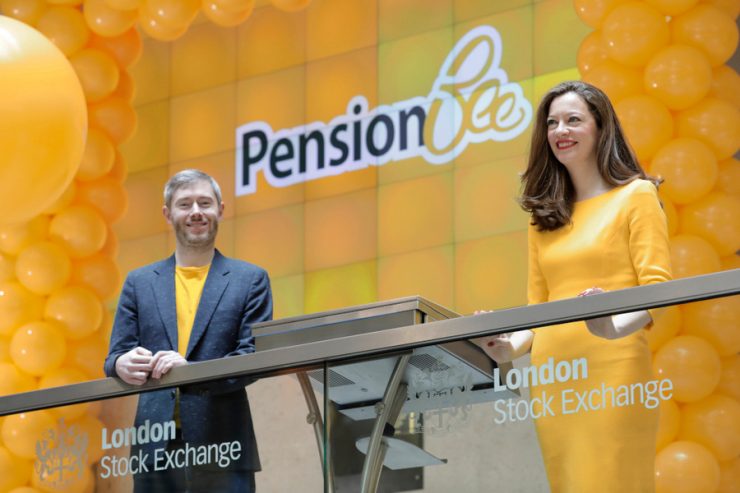 Many of the best businesses are born out of frustration that something could work better. That’s exactly how the idea for PensionBee came about, when founder Romina Savova tried to move her old pension and found traditional platforms complex and archaic.

Joining forces with co-founder Jonathan Lister Parsons, the pair quit their jobs and set about creating a consumer-first online pension provider. One of its key aims was to enable users to easily combine their pensions in one place.

It didn’t take long to realise they were on to something. In the first year of launch, PensionBee won the Harvard Business School New Venture Competition and the Financial Times Future of Fintech Award.

In year two, their Assets Under Administration (AUA) exceeded £100m. They went on to raise £35m before becoming a publicly listed company.

We’re delighted to announce that Romina is joining The Pitch Final 2022 judging panel, bringing her valuable experience to our early-stage founders.

The challenges of running a high-growth startup

It’s been a fast ascent for such a young business. But even founders with success stories experience plenty of setbacks along the way. For Romina, her first hurdle was giving consumers control of their pensions.

“One of my most prominent memories is having to battle some of the legacy pension providers. We had to convince them that pensions belong to the customer. That it’s the customer’s right to have a pension provider that can offer visibility, customer service and the kinds of investments that consumers want,” she explained.

Dealing with corporates as clients has also come with its challenges.

“It’s important to remember that they move to a very different timescale. They can be incredibly slow to make decisions. Often they will make a decision simply by virtue of not saying no,” Romina said.

In these situations, she’s coped by being prepared, learning to be patient and making sure she has the cash runway to be able to “go along on the journey of corporate decision making”.

Learning from others on your team

As the business grew, Romina found herself “trying to do a little bit of everything”. She realised that she had to learn from others on her team.

“As a founder, it’s important to recognise that there are people who are better than you at virtually everything. Take the opportunity to learn from them and give them the autonomy and the independence to make decisions along the way.”

In the early days of PensionBee, Romina was heavily involved in product development. As the company advanced, she found that other employees became much closer to the product from a technical standpoint.

“My role as the founder is to listen and understand how the solutions they’re proposing will fit in with what customers want. You need to learn to connect the dots rather than trying to do everything yourself,” she explained.

The drive for gender parity

It’s one of the reasons why she wanted to judge The Pitch; the gender split of the 2021 semi-finalists was nearly 50/50 and three out of the last four winners were female.

“Any female founder who has been through multiple rounds of fundraising will tell you first-hand about the experiences that have occurred along the way. These are experiences that male co-founders may not have been subjected to,” she said.

She believes there are complex reasons why the gender funding gap exists within the startup ecosystem. But one key aspect is that there aren’t enough female decision makers handing out cheques when it comes to fundraising.

“Many of the stereotypes about women and the way they run businesses and their ambitions for success can become quite dominant in the decision-making process. To achieve funding parity between men and women, we need to have parity amongst the decision makers,” she said.

“We have to keep advancing the agenda of equality within private companies. I’m in favour of public targets for gender pay gaps, for female seniority on boards and management teams, and targets to ensure diversity of funding.”

A sounding board for other startups

So what will Romina be hoping to see when she judges The Pitch?

As a seed investor in companies like Seen on Screen, Romina knows what she’s looking for in startup founders. At the top of her list is passion.

“What inspires me about early-stage founders is that they are always exceptionally passionate about their business,” she said. “Many are still in the idea phase and seeking to wow their customers. That enthusiasm and joy for their business should really come across clearly.”

She adds that it’s important to have the fundamentals of a business model in place at the start of your journey. It’s the best way to prepare yourself for seed funding and any subsequent funding rounds. A sound business plan should include:

Finally, Romina is keen to be involved in The Pitch so that she can use her own experiences to help startup founders advance their businesses.

“I think it’s incredibly important for founders to feel that they have a sounding board in other entrepreneurs who have been through the same journey. I’m hoping I can provide some input and advice, and ultimately stay connected to early-stage businesses.”

Want to get your business in front of PensionBee and other amazing founders like Romina? Apply for The Pitch 2022 now.