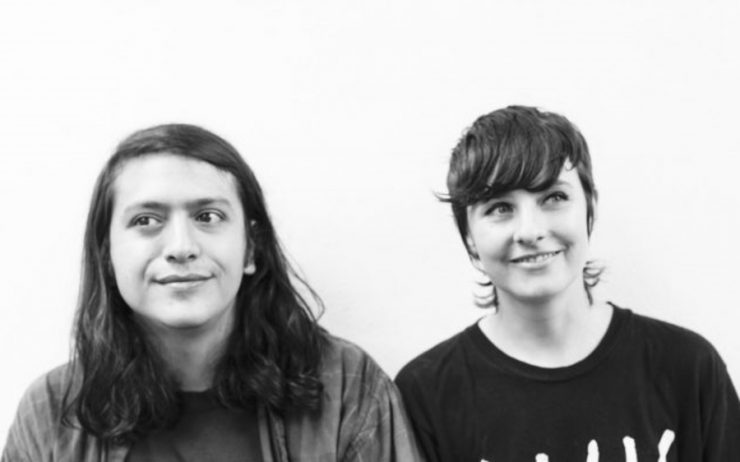 As this strange and difficult year draws to a close, it feels good to finally have something to celebrate – in this case, The Pitch 2020 winner Terrible Merch.

Live music was one of the industries hit hardest by coronavirus. Tours were abruptly cancelled at the start of the year and many artists had less than 24 hours to return home before borders closed.

It left Terrible Merch with a problem – how do you run a business supplying merchandise at live music shows when the entire industry has ground to a halt?

“It was a needs-must situation. A bunch of our artists had to literally walk out of sound checks to get back to America. They lost money on those tours and had all this merch they would have sold. It was unlikely that they were going to be ok for a long time. So we thought, how do we make them money?” co-founder Tersha Willis remembers.

The complicated logistics of music merchandise

Tersha and Jack McGruer founded Terrible Merch in 2016 after running a fashion brand together. The pair realised that there was a lot wrong with music merchandise and, if they applied their knowledge from the fashion industry, they could build a viable business.

It didn’t take long for Tersha to realise that technology would be integral to their growth. There were so many people involved in the process that she often found herself sending between 90 and 120 emails to organise merchandise for artists on the road.

“You have to connect a network of suppliers to artists and make sure the product is designed right. Then you have to arrange logistics for a moving target who is in a new city every night of the week and there’s only so much space because they’re travelling in a truck,” she said.

“The only way we were going to scale the business without hiring hundreds of people was to build the technology that would automate all the difficult work.”

Terrible Merch delivered the MVP of Terrible Merch Live in 2019. Less than a year later, the coronavirus hit and the team turned their attention to ecommerce.

Focusing on ecommerce was never part of the plan, but it’s provided a valuable revenue stream this year.

When tours were cancelled in early 2020, Terrible Merch started getting tour merchandise to warehouses that could still operate and then selling it online. Music fans responded positively and new artists signed up as a result.

The success of the online store persuaded Terrible Merch to pivot their technology. Now, artists can manage their own online sales.

“Ecommerce isn’t as simple as you would think. Every artist is a whole new account and you have reporting, inventory and stock taking for each one. We started to build that into the technology, so artists can manage both their tour and their online business. They can see all their sales and when a re-stock is needed.

“It’s a huge shift in mindset for artists, but it’s an exciting time because it’s always been a struggle to get people to understand that merchandise is vital. They don’t really know how much money is in it,” Tersha explained.

Finding investors and building a network from scratch

Terrible Merch’s first round of funding raised £87k from friends and family; a second round is planned for March 2021.

The company is already making money, so has the benefit of taking a slow and selective approach to investment. Tersha is talking to a small boutique VC in Seattle at the moment, but knows that American investors may need more time to come aboard.

“America is much worse off with coronavirus right now, so we want to make sure that there’s enough time for them to move aboard slowly and make a confident investment. We’re going to have one or two investors in this next round and they really have to believe in us wholeheartedly,” she said.

Tersha developed her network from scratch. She joined investment conferences, which built up connections. The challenge was turning these connections into relationships.

“When you cold call VCs or investors, you don’t get much of a response unless you know exactly who they are and what they’re interested in. You have to have a relationship with them – like, would you accept a phone call from them on a Sunday evening? It’s a hard thing to build up.”

From reluctant pitcher to The Pitch 2020 winner

Tersha put off pitching for a long time. Better communication only became vital when she realised that people outside of Terrible Merch thought they just made t-shirts.

“I was a reluctant pitcher from the get-go. I really just thought my charm and good ideas would win things over. But when you have a good idea, you really do have to shove it down people’s throats. The only way to do that is to learn how to communicate extremely clearly and that takes so much practice.

“It’s something that I fought against for so long. I finally caved when I realised that everyone who works with us knows it’s great and that the idea works, but people outside the industry don’t quite get it.”

Being able to communicate the concept clearly has taken a lot of practice and failure. The Pitch was useful for refining how she explains Terrible Merch, particularly in 90-second and two-minute pitches.

Tersha recommends making sure a seven-year-old would understand your pitch.

“It’s an art to be able to communicate a really big idea in very few steps and make it easy to relate to and understand. Just speak to everyone like they’re seven years old or like they just woke up from a 20-year sleep or something. That’s probably the best way.”

How The Pitch is helping Terrible Merch break down barriers

Winning The Pitch has been a confidence boost and is already helping to open up doors for Tersha.

“I was genuinely shocked to have won. There were so many really great ideas that were well-thought-out and perfectly pitched and executed. It was a really nerve-wracking and exciting process, every part of it.

“Winning has broken down barriers in that people who wouldn’t speak to us before are now speaking to us. It’s a phenomenal thing – it gives you confidence going into these meetings because they know you’re going to deliver something that’s award-winning,” she said.