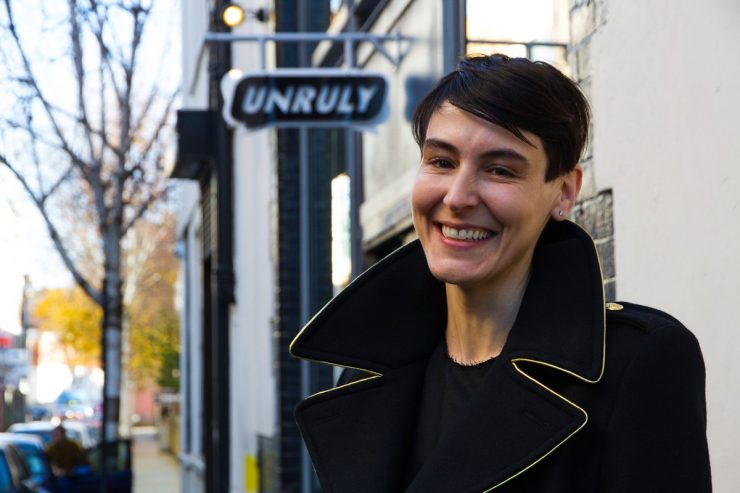 How Unruly became one of the fastest growing tech companies

Unruly grew from a three person, Shoreditch-based startup to an international company by building a huge data set around the virality of videos. We sat down with Sarah Wood just a few months before Unruly was acquired by News Corp in 2015, and talked about how her business became such a success.

Sarah Wood, Matt Cooke and Scott Button launched Unruly in 2006 when the internet was beginning to evolve from the information superhighway to today’s social web. That meant a rapid increase in the self-publishing and the founders believed video would play a crucial role.

“We were enormously excited by the potential of video,” remembers Wood. “It was very early days and the bandwidth speeds meant penetration was low, but where video was being uploaded it was having a huge impact.”

At that point, Twitter had only just launched and Facebook wasn’t at critical mass; the social buzz was in the blogosphere and Unruly was built around a blog scanning engine, which produced one of the earliest viral video charts.

“This was the basis of our whole product set,” explains Wood. “Although we’re a programmatic distribution company, we also have very deep analytics and unique data sets because we’ve been tracking video right from the start.”

Monetising the product happened naturally. Brands and advertising agencies began asking: “How can we get our video content into your video chart? How can we create and distribute content that is shareable and resonates with our audience?”

Unruly generated £26.9m revenue in 2014, after a record-breaking fourth quarter that saw turnover increase by 40% on the previous three months.

Building a team from three to 30

The first challenge the founders faced was finding a suitable location to grow. The business started out in a co-working space and the team stayed there for several months. Next they moved to the Old Truman Brewery, which was flexible enough to allow their staff to grow from three to 30.

In this embryonic stage they tried to build a team of multitaskers and self starters who were capable of working across multiple disciplines.

“We had an internship programme before we had any clients,” adds Wood. “We were in a new field. They weren’t training students for the skills we required because it was emerging. This is a time before there was such a title as a social media manager.”

Wood says one of the biggest early-stage challenges was getting feedback and making sure the team wasn’t building a product in a vacuum.

“We were thinking about it as moving quickly, learning quickly and failing quickly, and then moving on to the next thing,” says Wood, who adds this resembles the approach later labelled ‘lean startup‘.

Silicon Valley entrepreneur Eric Reiss formalised the business model in 2011. The key to his failure-inspired approach takes its cues from manufacturing, looking at activities in a corporation that are value-creating and which are wasteful.

“We need to re-engineer companies to focus on figuring out who the customer is, what’s the market and what kind of product you should build,” Reiss told Wired a year after his treatise on the subject was published.

Lean startup calls on entrepreneurs to regularly change products to meet the needs of early customers. For Unruly this meant iterating from a web 2.0 comedy portal called Eatmyhamster.co.uk (the site no longer exists), to a viral video chart and then a distribution platform.

“It was only at this point we realised that this was a business model with strong client demand and lots of scope to grow,” says Wood.

Scaling from an early-stage startup

Establishing a consistent hiring process was crucial to scaling the business. Wood says this happened around the time the business hit 40 employees, but it’s easier to think about it in terms of hiring velocity, rather than staff numbers.

The hiring rate had reached three to four people every month by 2011, at which point it became too much of a drain on the founders.

“For me 40 [staff members] was the earliest inflection point given the rate of growth we were experiencing,” says Wood. “We needed to get lightweight processes in place, minimal viable process to be able to scale quickly and sustainable.”

Introducing managers ensures staff receive direct reports, support and guidance, something founders become too stretched to do, and they can take over the hiring process.

“It’s the most incredible joy for everyone when you hire a fantastic manager,” says Wood. “The danger is you need to hire someone that can win the respect of the team; if you hire a second rate manager to run a first class team it’s going to be a disaster.”

The management team was structured and developed around the founders’ specialities: Button covers sales, finance and vision; Cooke technology, the development team and tech infrastructure; and Wood building the team and ad ops delivery and client services.

Today, Unruly has offices in 20 locations worldwide, including the UK, France, Germany, Sweden, Norway, US, Korea, Singapore, Australia, Netherlands and the UAE.

Another inflection point in a company’s growth was felt around 140 or 150 staff, says Wood. This is sometimes referred to as Dunbar’s number, which is the limit of the number of people you can maintain stable social relationships with.

Wood also taught the Mash-Ups, Memes and LOLitics: Online Video Culture and the Screen Media Revolution course at the University of Cambridge. This meant she was able to spend the term thinking about the future of digital video with “the smartest students in the UK” and this has provided another route to source staff.

Wood says the key is to instill a culture that’s developer friendly and developer led. That means Unruly has rolled out processes and best practice from their department to the business’ other divisions.

The importance of diversity

Diversity’s played a key part in Unruly’s expansion and Woods describes the lack of female workers in the tech industry as “worrying”.

“I strongly believe the reason we’ve been successful is that we have a really diverse team,” she says. “Diversity in terms of discipline, gender and nation. We all bring our different perspectives to the table. That’s incredibly helpful when you’re solving problems, when you’re innovating and when you’re trying to look around corners.”

She believes the key to increasing diversity in the industry is having more relatable role models who are visible to women that are just starting out or making their career choices.

“There’s no skills gap, there’s no ability gap, there’s just a confidence gap. All that separates you from everything you’re hoping for in your career is courage,” says Wood.

Building products for the future

Unruly has only raised one round of funding. In 2012, it received $25m from three backers: tech VC Amadeus Capital Partners; media VC Van den Ende & Deitmers; and the British Growth Fund, which is backed by five of the UK’s main banking groups.

How Unruly became one the fastest growing tech companies in the UK “I think that’s so true,” says Wood. “When everybody’s future gazing it’s really about looking around them, seeing what else is going on elsewhere, applying other disciplines to your own and taking ideas from other geographies. It’s not hard to guess what’s coming next, but it’s much harder to predict when ideas will gain traction. That’s what I always remember.”