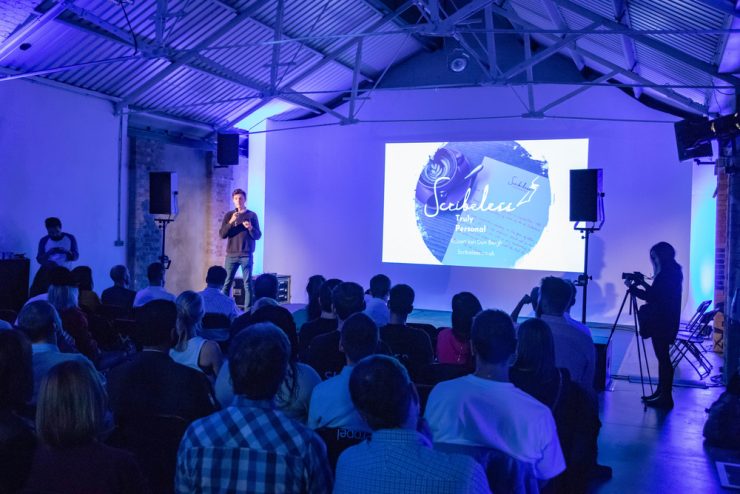 The startup using tech to deliver a personal message

When the post arrives with one handwritten envelope and one that’s typed, which will you open first? Robert Van Den Bergh knows from experience that most of us will pick the one that’s handwritten – in fact, he believes in the power of the personal approach so much that he’s based his business on it.

Van Den Burgh is co-founder of The Handwriting Company, a startup that helps organisations better engage with their customers through the power of the handwritten letter. But, while the name suggests a gang of people scribbling away, the reality couldn’t be further from the truth.

“We’ve created technology that can mimic handwriting. It can then be printed at scale on a good quality office printer or on robotics based in our facility. So instead of an organisation hiring 100 people to handwrite notes and pay a huge amount of money, we can fully automate the process.”

Do your research first

As with most innovators, the idea was born out of a realisation that a solution was needed to fix a broken system.

Van Den Burgh was on a marketing internship two and a half years ago when his manager got him involved in a handwritten marketing campaign.

“I was the fool who took three weeks writing out all the letters,” he laughs. “But it was one of the most successful marketing campaigns they’d ever run.”

This prompted Van Den Burgh to research the market. He found about 30 companies offering a similar service, but they all had people writing letters by hand. “I could see that the economics behind it didn’t make sense and it just wasn’t efficient enough to make it an effective tool.”

Van Den Burgh joined forces with Alex Robinson, an AI engineer with a background in computer science. The two founded Scribeless,  which has since been renamed The Handwriting Company.

Together they began a huge research piece to see if they could use technology to optimise and automate the process of handwriting using AI, algorithms and robotics. It took time, but they developed a programme that could learn someone’s handwriting at a level that was indiscernible from human writing.

They then equipped robots with classic fountain pens and ink that can even mimic the physics of pen pressure and variation and deliver thousands of letters in hours.

Taking a punt at entering The Pitch

The pair reached the stage where they had a rough idea of the market needs, technology and where they wanted to take the business, when a friend recommended that they enter The Pitch.

“It was about this time last year. I thought we didn’t really stand a chance because we were still a very new company, but we gave it a go. We were lucky enough to get to the semi-final and then the final!”

For Van Den Burgh, the day at the boot camp helped them to better understand how to articulate what they offer.

“The format of pitching is very short and sharp and about getting your main points across. We spent a day discussing our concept with the boot camp coaches. They gave us feedback to really help us understand how to better articulate our story, the problem and how we could help solve that problem.”

Staying ahead of their own game

It’s been a busy year for the company since then. The model has moved on from robotics to Advanced Printing Technology, which can print a handwritten note indiscernible from human handwriting. It’s helped them create handwriting campaigns at scale.

The company’s client base includes banks, churches, charities and corporate gifting companies across the UK, US and Germany. They’ve also established their place within the greetings card space. Things are looking healthy, but one of the biggest hurdles they still need to overcome is funding.

It’s really hard to do everything on a shoestring budget

“Until now we’ve been fully self-funded. It’s been really hard to do everything on a shoestring budget. It’s part of being a startup, but it has been a strain on resources – only having 10% of the funds you need is difficult.”

This has led The Handwriting Company to raise investment, with the aim of building the team and scaling into the US.

“We’re just about to close our investment round, with a mixture of angels and investment capitalists, so we’d like that to fund five or six new people across sales, tech and marketing to allow us to keep innovating and build a more scalable model.”

It’s important for Van Den Burgh to get more competitive and to “out-innovate” their own technology. His key objectives are to make sure they can deliver quickly and at an affordable rate. At the moment, it takes a couple of days for the software to mimic handwriting, but the aim for the near future is to get this working in real-time.

The importance of the “mum test”

What advice can Van Den Burgh offer other entrepreneurs? If you’re right at the start of your business journey and everyone thinks your ideas are great, it’s time to do the mum test.

“There’s a great book on the subject which is all about framing questions in the right way. The idea is that when you talk to your mum she will always say, ‘it’s an amazing idea and you’re amazing’. Most people will do this because they don’t want to hurt your feelings, so this book helps you to start framing questions in a different way to get honest feedback.”