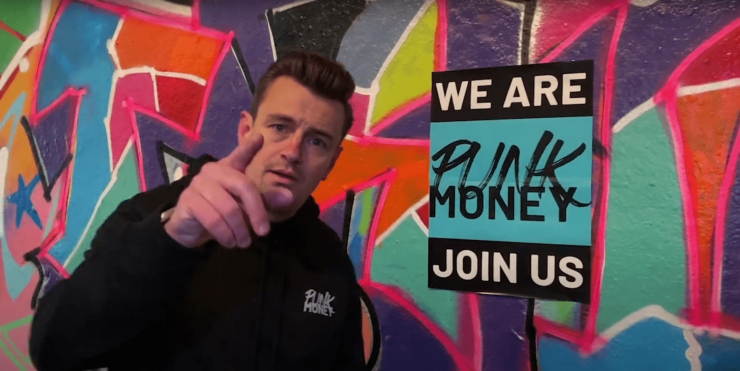 The Pitch 2020 People’s Choice winner was never really in doubt. When Punk Money finished their pitch – filmed in a graffitied underpass –  questions flooded in from people watching online.

Ewan Dickie had the idea for a community-driven lending platform while working as a contractor in open banking. He found the financial system archaic – no one liked how it worked yet no one was doing anything to change it.

We spoke to Ewan about starting Punk Money, finding investors and his tips for creating a successful pitch.

Find a co-founder with a complementary skill set

“I went in search of a team mate which took a long time. I interviewed 30-odd people for the role. Eventually I found Nick and we instantly hit it off. We have very complementary skill sets and a lot of respect for each other’s knowledge,” he said.

Having the right expertise on board has been crucial for Ewan, from his co-founder to his extended network. He describes his non-exec as “instrumental” in giving him faith in his idea.

Ewan credits thought leadership and the ability to create a memorable presence with attracting these top-tier individuals. As he puts it, it helps to be a big company before you’re a big company.

The idea that someone might steal your idea is a fallacy. If it’s easy to steal, you might want to work harder on the idea.

But building a network of investors isn’t easy and there aren’t any shortcuts. All you can do is keep reaching out to people until they believe you’re ready.

“I’ve got a list of two thousand angels’ LinkedIn profiles or emails. I’ve contacted them all. One of the crazy things is that it’s apparent when your business hits that point of being ready. The message hasn’t changed in the last six months, but the interest is 50 times higher. You start to see people come to you,” Ewan said.

Distill your pitch down into the simplest idea

There’s a tendency to cram as much detail as possible into a pitch, but Ewan recommends distilling it down to the simplest idea. Then, it’s just a case of practising it.

“Don’t be afraid to talk to people about your idea within the community of entrepreneurs. There are people who will actively go out of their way to help you.

“Even if it’s someone with a similar business, ask them for a chat. The idea that someone might steal your idea is a fallacy. If it’s easy to steal, you might want to work harder on the idea,” he said.

The resources are out there, but creating a successful pitch is still hard work. As Ewan explains, it takes a lot of tenacity to push a Fintech concept to get the funding you need to build a product.

Ewan defined Punk Money’s values at an early stage and says they have helped him make good decisions.

One of their values is that they’re a champion, not a challenger. Ewan’s clear that he doesn’t see Punk Money as competition for banks.

Another value takes inspiration from Bill & Ted – be excellent to each other. It reminds him to make the right hires and get the right investors.

“There are investors who want to make quick money, but we want to build a company that’s more valuable in the long run. Having those values allows us to make those decisions. Putting a mark in the sand is good for us and good for everyone.”