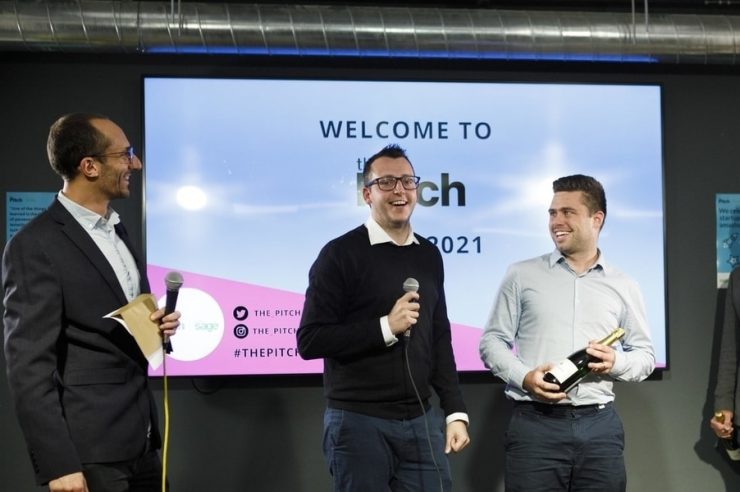 From wildcard to People’s Choice winner: The story of refereeing app YesRef

The Pitch finalist YesRef is the brainchild of friends Ben Williamson and Olly Rodriguez-Ballinger, who first met on a refereeing course back in 2005.

Ben and Olly realised there was no single location to match referees with fixtures. Games happen across the country almost every day, yet it was still a manual process to find out what was available.

Niche? Yep. But it’s the niche problems that tend to capture people’s attention – so it was no surprise when Ben and Olly walked away with the People’s Choice prize at The Pitch Final 2021.

We spoke to Ben to find out how YesRef started, the challenges of building a minimum viable product (MVP) and what they’ve got planned next.

Testing out the idea

Like most startups, YesRef was built out of a personal problem. Ben recounts the frustration of having a free evening but no idea which local games might need a referee.

“It’s a Monday evening and you think, ‘I could go referee but I don’t know where’. It seemed like a really disjointed system that we could fix from having that personal experience,” he said.

Ben and Olly started by getting social proof, speaking to referee colleagues who had experienced the same problem and shared their frustration. This gave them the confidence to start brainstorming ideas and move forward with an MVP.

“We went and spoke to some local clubs we knew really well and said, could we try it? It was about seeing how it would work, whether it was a good idea and if it could be monetised. Basically, is it a business or is it a hobby?” Ben said.

Developing an MVP is famously tough for startups. You’re cash strapped and there’s always a question over how far you need to take the prototype at that stage.

Ben remembers the early prototype requiring a lot of manual work to run, even if it appeared automated to users. He eventually discovered tools like AirTable and Zapier – the latter, he says, was “life changing” because it automated YesRef’s confirmation emails.

But those early days of manually managing the MVP taught Ben a lot about what customers wanted from YesRef. That feedback was used to build the next iteration.

“You have people that signed up and requested referees – brilliant, it works for them. But we wanted to talk to the ones who signed up then stopped. Why did you not use it? What didn’t you like? Some of the feedback we got was that it was just too technically challenging.

“We picked up different learnings on what to change about the platform to make it work. So that was the benefit of being all manual – you learn, learn, learn. We got to build, measure and learn, then rebuild, remeasure and relearn. We went through that cycle and now we’ve got a built platform and understand quite a lot about what users do.”

Getting the right balance of users

Once YesRef had a working MVP, the next challenge was getting the right mix of users. For the platform to work, they needed to nail the balance of referees and clubs.

It’s hard work to build a user base from scratch, but YesRef had the unenviable task of attracting two types of users to a new, unfamiliar marketplace.

“It was about understanding the data we had: how many referees do we need per sports provider to match the role? So if we knew that we needed 500 referees for 75 sports provider games, that builds some metrics to help you scale.

“There are so many variables for referees: whether you’re available or not, whether you can do an 11am kick-off game but not an afternoon kick-off because you’ve got young kids. So we always aim to have a lot more referees on the platform so the chance of covering a game is higher,” Ben said.

Ben adds that the experience YesRef offers is vital because they’re trying to change 100 year-old behaviours. It’s a new platform that’s going up against traditions of how games work for local clubs.

“We made our costing model on a transactional value dependent on success. So if you add a game but don’t find anyone, it doesn’t cost you anything. It’s no different to just putting the game on Twitter, although if a referee comes through us we can guarantee they’re qualified.

“It was really helpful for us to understand that. We could market and cost the product appropriately to what we were actually delivering.”

YesRef made it through to The Pitch Bristol semi-final, but Ben was thrown into the deep end when Olly realised days before he couldn’t attend.

“It meant I’d be pitching in Bristol. But it was a great event and I met some amazing people. We didn’t get into the top two which was a shame, but we ended up being a wildcard that went through to the final.

“So we went down to London to pitch and met some amazing judges and businesses. We were fortunate enough to win the People’s Choice award, which was incredible and very unexpected. It was great to know that the product resonated with other people.”

YesRef’s plan for next year is to scale up the business and raise investment to help with growth. They’ve got a new raise starting in January around the half a million mark.

“We met some great people at The Pitch. We’re on talking terms to get some investment directly out of The Pitch which, again, is an amazing story as a wildcard. One of the judges also put us in touch with Crowdcube, so we’re going to use Crowdcube for part of our new raise,” Ben said.

YesRef aims to close their next raise by the end of Q1, then spend Q2 tidying up and streamlining the platform. There’s an opportunity to expand YesRef into Australia and Ben is planning on growing the team to help them maintain the pace.

“Ultimately, in any startup, there’s so much that needs to be done. There’s only Olly and I that are doing it, so we want to grow the team to help springboard the growth but keep it as tight and sensible as we can.”

Want to follow in the footsteps of YesRef and win the opportunity to pitch your startup to a panel of investors? The Pitch 2022 applications will be opening soon. Sign up to our mailing list and we’ll send you an alert as soon as they open.

Seven ways to build a community as your startup grows

The seven biggest mistakes startups make when developing an app