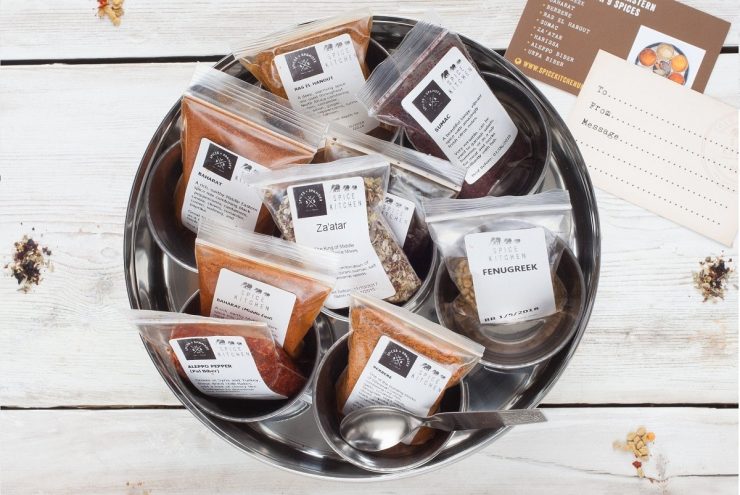 Spice Kitchen is a family run artisan spice and tea company that specialises in sourcing the freshest raw ingredients from around the world. All its spice mixes are packaged in authentic Indian spice tins, known as Masala Dabbas.

Co-founder Sanjay Aggarwal is an entrant in The Pitch 2018. We spoke to him about running a family startup and how they have scaled from packing spices at home to running their own production plant and shipping internationally.

The idea for Spice Kitchen was cooked up over the Aggarwal family’s kitchen table on Christmas Day 2012.

“The Masala Dabbas is a stainless steel round tin that houses your seven key Indian spices, so that they’re all in one place when you’re cooking a curry. Most Indian households have them and ours was no exception. As we were chatting over Christmas dinner, we had the idea of creating more like my mum’s and selling them on eBay,” explains Sanjay.

Sanjay’s mother Shashi, who was born in Kenya and grew up in India, has more than 50 years of cookery experience and, having recently retired, was looking for a project to take on.

After taking a picture of her tin and listing it that day, the first sale was made on Boxing Day.

“We were quite surprised by how quickly it sold and, as the weeks went on, we sold more and more of them. Six months later, we had sold far more than we ever thought we would, and that’s when we realised this business had real potential”.

Fast-forward six years and the business has now taken on a life of its own, with almost 200 stockists across the UK, Ireland and France and many more sales under their belt.

Growing from startup to large-scale production

With a background in retail and business respectively, this mother and son team were no newcomers to startup success. Sanjay grew up helping his parents run their shop and, after getting his business degree, went on to set up his own recruitment firm at the age of 24.

“When we set up Spice Kitchen it was mostly as a hobby for my mum and neither of us expected it to become a full-time job for her – let alone me as well! But it grew faster than any of us predicted and now we make a great team as we have a good mix of skills between us”.

Despite the family’s extensive business experience, the rapid pace of Spice Kitchen’s growth took them all by surprise.

“We’re growing at such a fast rate that we’ve had to tackle a lot of challenges very quickly. We have constantly been caught short by demand, so it feels like we’ve been chasing our tail a lot in the first few years. We like to make all our spice blends fresh in small batches, so we’ve gone from doing it all in a bowl to an industrial machine.”

“We started out working from my parents’ home, where we converted their double garage into a workspace, and part of the extension into a warehouse to accommodate our stock.”

The business is now moving into its first purpose-built facility in Liverpool, where all the production, packing and business management will be housed in one place.

“This is going to be a great move for us because we’ll finally have the space we need to keep up with demand. It will also give us the capacity to take on bigger stockists and contracts.

“With our own facility, we’ll be able to get our SALSA food accreditation, which means we can produce to supermarket standards. We’ve already spoken to a couple of supermarkets that are interested in our products, but we were unable to do anything with them. This move will open up lots of new opportunities for us.”

The product range has been extended to include a variety of spice collections including Indian, Moroccan, African and Middle Eastern, as well as specialist sets of chillies, sea salts and loose teas.

“We realised very quickly that the Masala Dabbas concept could expand to cater for different types of spices and recipes. You can have more than one set in your cupboard, depending on what it is you want to make – and no one else seemed to be offering that,” says Sanjay.

A fortuitous experience at a food show also led to a new packaging opportunity, which has really helped the product to stand out.

“My mum came up with the idea of creating a nice display by cutting up a sari to make a gift wrap for the tin. Every customer who walked past asked to buy it and we had to explain that it was just for display. That’s when we realised there could be a market for custom-wrapped gift tins.”

After emptying Shashi’s sari cupboard, the business has since launched a sari donation scheme, allowing Asian women who have spare saris to donate them to be made into gift wrap, with proceeds going to FRANK Water, a Bristol-based charity.

“We get through about 100 saris a year and it helps us raise money for some wonderful charities. The main one is FRANK Water who build sustainable water projects in India and Nepal”.

As well as continuing to grow the product range and increasing the consumer side of the business, Sanjay has big ambitions for growing another key market – contract packing.

“We currently supply spices to other producers such as chutney makers and chocolatiers and we also see a big market for us in packing spices for other companies. By keeping an open mind about things, we’ve also been able to take on some really interesting partnerships.

“For example, recently we teamed up with the flower delivery company Bloom & Wild to sell our spice blends with recipe cards alongside their fresh chilli plants in beautifully packaged kits. They contacted us about five weeks ago and we were able to turn it around very quickly so that the kits could be launched in time for Father’s Day. We just love doing creative collaborations like this and we are always looking to do more of them.”

Getting your business out there

In the spirit of seizing new opportunities, Spice Kitchen has entered The Pitch 2018.

“We’re very excited to be a part of The Pitch 2018 because. As well as the exposure it gives, the mentoring package prize would be very useful to us. Now that we are scaling the business, we could really benefit from access to all these experts to help develop our skills.”

So what advice would Sanjay give to other entrepreneurs sitting at their kitchen table with an idea?

“We were in that position six years ago and so to anyone with an idea, I’d say you won’t know until you try it. You can literally launch your product online today and start making a profit immediately.

“We’ve never taken any investment to boost our business – we’ve just reinvested our profits and grown organically. You don’t always need a lot of money or investment to start a business; you can start small and grow slowly if you don’t want the risk. It is possible. So my advice is very simple: go for it!”

Journalist, IDM qualified social media practitioner and digital marketing expert with over a decade of experience creating content and social media strategies for a wide range of clients from SMEs to FMCGs.