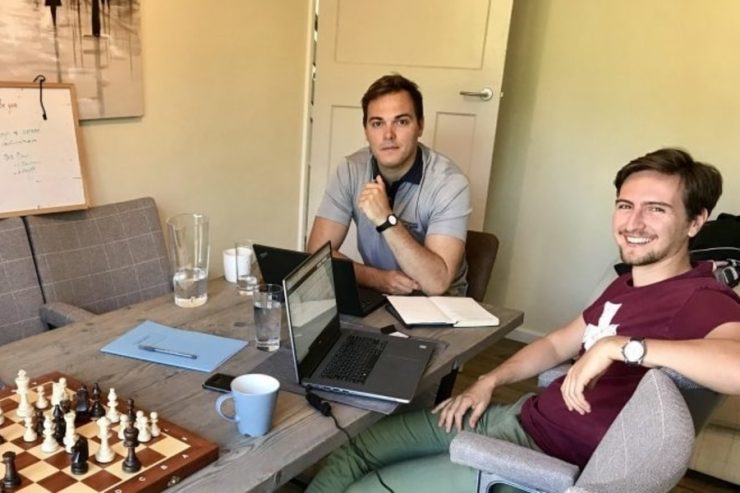 We spoke to co-founder Connor Miller about side hustles, staying motivated and entering The Pitch 2019.

When searching for a trip of their own, Miller and Cardoso i Negrie found it impossible to decide which deal was the best value for money. It inspired them to set up their own comparison site, with the hopes of making the stressful process more manageable.

“It was about a year and a half ago. We’re keen skiers and started searching for a trip. We had a rough criteria and budget and dates, but what we were getting back was endless deals and packages. You couldn’t compare them – we had hundreds of tabs open,” Miller said.

“We thought, ‘there must be a method to compare this’. That’s where Ski Deal Comparison was born. We wanted to save time and money for skiers, by enabling them to compare.”

Starting a side hustle

As a full-time systems engineer and data scientist, Miller and Cardoso i Negrie run the business in their spare time.

“I only work on Ski Deal Comparison in the evenings, so one of the biggest challenges is time management. It’s incredibly hard to work nine to five and then come home and work until 10pm,” Miller explained.

“It’s been really interesting having a friend as a co-founder too. We only realised the other day that we haven’t spoken as friends for months because we’re always straight onto Ski Deal business.”

It’s incredibly hard to work nine to five, then come home and work until 10pm

Currently, the team isn’t interested in making Ski Deal Comparison a full-time occupation. They’re focused instead on making their website as efficient and useful as possible.

“We’re not estate agents. We’re building a search engine that should be able to pull information through automatically, so if we go full-time there’s something wrong with the way we set up the product,” Miller said.

To make sure Ski Deal Comparison was solving the most common user pain points, the team used a survey to get audience feedback.

The main aim was to understand how the site could provide the most value in the shortest period of time – Miller understood from personal experience that time investment was one of the biggest frustrations of booking a ski trip.

Their research showed that they were on the right track, but it also surfaced additional pain points. Confusion around price was a key issue, with costs often inexplicably doubling by the end of the booking process. Another issue was the lack of information in one place – users had to visit multiple websites to understand what a single deal included.

The process helped Ski Deal Comparison to understand how and why people search. It also emphasised how important transparency would be for the company.

“We want to be totally transparent with the product. The product should be free and we’ll work on a referral basis from the providers,” Miller said.

Miller believes organisation is key when starting a business. Try to eliminate distractions, selectively choose events and create clear goals to work towards.

“We found working in blocks really worked well. Have small goals to hit, turn your devices off and get a large chunk done.

“Identifying what distracts you is important. When you start up, there’s a lot of stuff that pops up that’s really exciting: social events and even The Pitch. They’re great for promotion, but you could be working on a deliverable. You have to balance nice distractions against deliverables,” he explained.

Working in blocks has worked really well. Have small goals to hit and turn your devices off

To plan their goals and create a business roadmap, the team allocated a weekend.

“We took a weekend to think about what the grand strategy was – to stop everything and think. The end goal was to build a product to help people save money, but below that we had sub-goals.

“Initially, it was very product-focused. We worked with the General Assembly and they offered us a two-and-a-half week sprint. We threw everything we knew out of the window and said we wanted to make an amazing booking experience. They spent a sprint redefining that and it challenged the assumptions we had. That generated our MVP,” Miller said.

Ski Deal Comparison took part in our Manchester boot camp in The Pitch 2019.

“The nicest thing about The Pitch was meeting people – you get to meet a group of driven, hungry people. When you’re exploring people’s ‘why’s’ in a room, it’s really powerful.”

“At the end, the networking was great. Everyone was really open-minded. There was no bias and no negative attitudes. It’s nice to surround yourself with that.

“We were able to pitch new ideas and challenges to a small group. It’s done in the right way because the group has the best intentions for you. Friends and family can be biased, whereas we had a whole group of people working on an idea, who are all founders of their own businesses.”