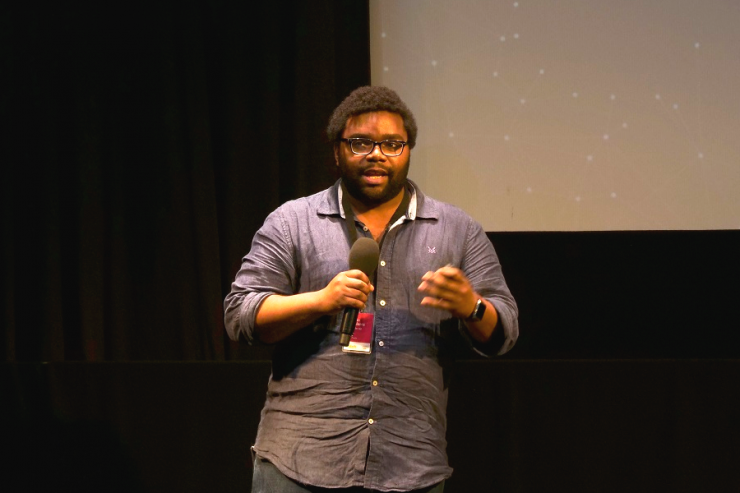 The startup building cutting-edge experiences for Sky and Snickers

The team is planning to raise its first outside funding this year, aiming to raise £1.3m to take its immersive tech even further.

As a young startup, Quander reached the final stage of The Pitch 2017 and has since grown from three to eight people.

For Quander founder Gavin Williams, now is the ideal time for an injection of funding. The business is in a stronger position, has a clear product and an impressive client base to help them attract the right funders.

How the startup found its specialism

Back in 2009, Williams started out running an agency building microsites.

“When I graduated, I had this wide-eyed view of the world,” he recalls. “We started the company to see how we could make people feel something online. To make a brand a person – but we soon realised that was a stupid idea.”

The agency was struggling to compete against emerging platforms that allowed people to do the work themselves. Paying clients were scarce and the company lost momentum. Then, a brief from Sky prompted them to try out a new direction.

“They asked us to build a photo experience for the O2 with software that would top and tail a video and send it to them reliably every time,” says Williams.

Their work was recognised by the NBA and the NFL, and Williams and his team quickly realised the potential of the concept.

“People really liked what we were doing, but they didn’t want to pay for it at the cost of building it from scratch every time. A client would come back in two months and ask for the same thing and we would have to rebuild it. So we thought, let’s make it more affordable by building a platform that can be reskinned and sublicensed.”

Refining the company pitch and strategy

As a startup, the team looked for people with the right experience to give them advice, realising that many new businesses fail when they try to go it alone.

This approach prompted them to enter The Pitch in 2017. They made it all the way to the final, an achievement that also saw them onboarded onto Microsoft’s Pitch partnership scheme. They received £18,000 Azure credits and other benefits (email Microsoft@ThePitch.uk for more details on how to take part).

“Doing The Pitch made us realise that we weren’t very focused as a team or company – if we hadn’t done it, I don’t know where we would be today. We didn’t really know how to get new clients and we’d confuse people when we pitched to them as we had no strategy.”

Williams has found the support from Microsoft’s programme invaluable, with free cloud credits, office and visual studio licences, support from an account manager and access to Microsoft’s extensive partner ecosystem.

“Our dedicated account manager has been amazing and really pushes their partners. We’re working with one of the partners that specialises in building solutions with Azure, who’s been encouraging us to go to loads of events.”

Staying true to your principles

For Williams, this feeling that you have someone ‘on your side’ is crucial to help the company build sales. Not only that, he has a strong set of principles that remain important as the company grows.

“My mantra for doing business is that I don’t want to change myself. You’ll never see me in a suit, for example. I feel like the benefit of working with us is that we’re really honest about what we’re going to do – we like to work with clients who think on the same level.”

He recalls turning down some work, which didn’t stand up to his principles. The client asked them to reduce their fee and white label the project. Quander has three core values – future thinking, democratising tech and integrity – and they turned down the project because it felt like it clashed with what they believe in.

The plan is to raise £1.3m by the close of the year, with the company aiming to raise half of the amount themselves – the rest will then be match-funded by Innovate UK.

“People pitch when they don’t have a product. Investors and venture capitalists take advantage of that – they give you money, but they take a lot of equity and the pressure is really high. I’ve seen people burn out,” says Williams.

While earlier funding might have helped the company grow faster, for Williams, it’s important to get investment from the right people. Having spent time developing the business, they’re in a stronger position to attract funders on the right terms.