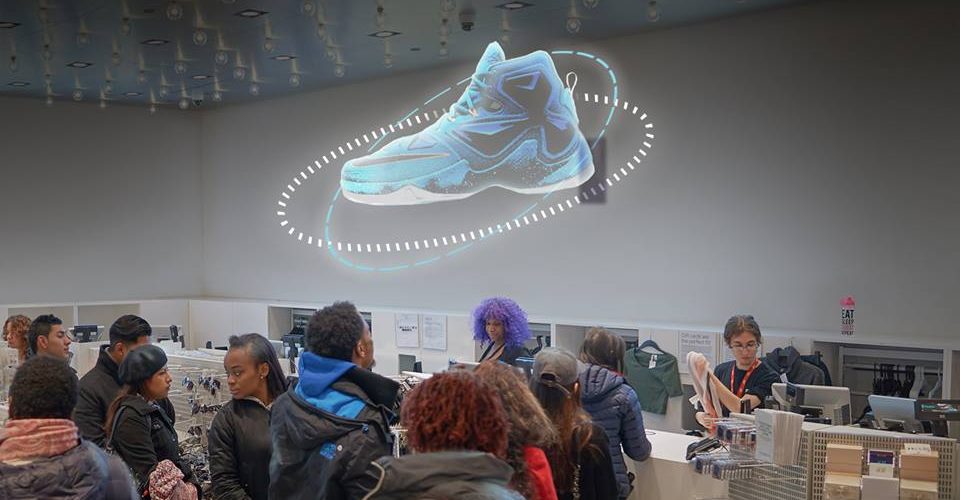 The concept of holograms might seem more at home in a Star Trek episode and big-budget stage shows – but one former contestant of The Pitch is making it an affordable reality.

HYPERVSN’s (previously known as Kino-mo) distinctive 3D holographic system promises to let companies buy and control advertising in a programmatic way similar to Google’s ad exchange: but, in this case, it could be a 3D model of a trainer hovering over a till or Mark Cuban’s head talking to consumers.

The business started while the founders were working in universities. Rapidly scaling from five to over 100 employees as they developed the technology represented a huge step change in the evolution of the company. More so, the founder’s role has had to develop too. We spoke to founder Art Stavenka about their progress so far.

PhDs take on the advertising world

HYPERVSN’s founders started developing a video bike product six years ago while working on their PhDs at Oxford and University College London. “We wanted to make all the people who travel by bike to work on the same route into a smart network. To create a technology that allows you to project high-quality videos out of bicycles’ wheels,” says Stavenka.

Three years into the process they hit upon the current iteration, a combination of hardware and software that allows you to create a 3D holographic image. The software allows you to manage large networks of these devices, upload holograms remotely, get sales reports etc. The software also has a smart content creation tool to transform basic 2D images and messages into appealing 3D visuals suitable for HYPERVSN.

This means that individual organisations could use them – from supermarkets and tube stations to casinos – and effective advertising networks can be created easily and quickly.

The HYPERVSN team decided to launch the product at the Consumer Electronics Show (CES) in Las Vegas in January 2017. The cost of exhibiting was worth it, says Stavenka:

“At CES you can skip lots of things that you need to take care of at a normal launch. The crowds are already there. All you need is a stunning technology to launch it.

“We had crowds and a queue. You had to wait five-six minutes just to talk to someone at the stand. It’s certainly could be called a successful launch and it resulted in 7,000 enquiries.”

Indeed, it led one journalist from Tech.Co to write the gushing headline: Help Me, Kino-mo, You’re My Only Hope for Affordable Holograms.

Stavenka adds the marketing strategy to date has benefitted from the videos people film and articles from various trade shows, which naturally draw interest, and the business continues to get 700-800 enquiries a week.

Previously HYPERVSN entered a series of competitions to market the product. The aim was to ensure the founding team was on the right track, and get feedback on what features the product needs and what people like.

They took their bike wheel product into Dragons’ Den in 2012 and were offered the investment, although they later turned it down. HYPERVSN was a 2015 finalist of The Pitch and it won the Pitch to Rich the same year.

Stavenka says entering competitions is less relevant to the current phase of the business, as most are aimed at startups. That said, he stresses the need for startups of all sizes to focus their efforts on getting feedback from customers and investors.

“The best thing to test what you’re doing and understand if it’s worth doing at all is to ask people that can put their money where the mouth is; investors or your end client.

“Other voices like experts and mentors might be misleading. People who’ll be paying their own money will be able to give the most valuable feedback on whether the product should be in the market at all,” he advises.

From academia to multi-country operation

Stavenka is keenly aware of the way the company and his role is evolving as it grows.

“We understand that a company of five people and a company of about 100 people are totally different. We have to be prepared for that,” Stavenka says.

HYPERVSN currently employs over 100 people split between the headquarters in London and an R&D centre in Eastern Europe.

“The research and development divisions are in different countries. This is something we need to adjust to gradually. I wish we had a particular role and stuck to it, but it’s not that easy.”

“This is a young company with a new technology that’s entering the market on a global level. Challenges arise every day. You need to be able to adjust to new responsibilities, you need to make everything happen and to set up a process to make sure things run smoothly,” says Stavenka.

Stevie Spring, a former CEO of one of the world’s largest outdoor advertising company Clear Channel, is now a shareholder. This is helping the founding team navigate some of these challenges.

The funds from the round were allocated to hiring new staff, investing in patents and manufacturing. The business has partnered with a multinational electronics manufacturer and now has its products in over 80 countries.

At CES 2018 the company commercially launched HYPERVSN Wall. The cutting-edge solution generates holographic visuals of pretty much any size and configuration. Immediately after its release, the solution received an overwhelming interest from blue chip brands and media worldwide. HYPERVSN has even created the largest ever life-size holographic person in a special project with BBC.

Chris is founder and CEO of Box 2 Media, the company that runs The Pitch. He's a journalist and editor by trade, and his work has been featured by everyone from The Guardian and The Financial Times to Vice magazine.

What we’re doing about diversity on The Pitch

The Pitch 2020 semi-finals are in September.

Book a free ticket to watch them online.