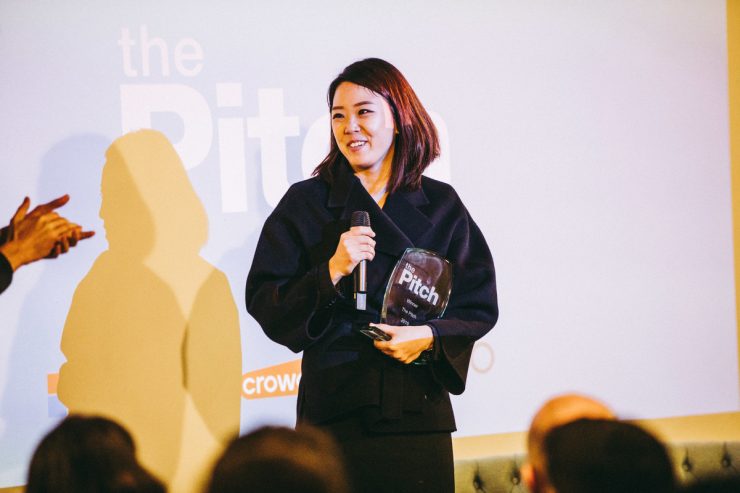 The Pitch 2019 winners – Lucy Jung and Floyd Pierres – have created a focused stimulation device to help patients with Parkinson’s disease. The Moment Device aims to improve performance for tasks like walking, dancing and hand exercises.

We sat down with co-founder Lucy Jung to learn more about how their business started and how the device works.

The inspiration behind The Moment Device

In 2018, 145,000 people were diagnosed with Parkinson’s disease in the UK – with no cure currently available for the disease.

After learning more about patients’ experiences with different treatments, Jung was inspired to create a non-invasive medical device that could help ease symptoms.

“The idea came from talking to a gentleman with Parkinson’s who said he felt comfortable on a massage chair. We looked at what the massage chair was doing and started trying out different prototypes,” she said.

The team worked with Parkinson’s patients throughout the entire design process to get continuous feedback on its effectiveness.

How The Moment Device works

With a team of medical doctors and design engineers, they developed a wearable device that gives fibre stimulation. The device sits on the sternum and helps to decrease symptoms like stiffness and slowness.

The device is also designed to give a cue sign to patients to improve the smoothness of their movement.

“It gives the same sign a doctor tells people to say in their head – it’s like a 1-2-1-2-1-2. People are encouraged to count in their head to keep movement ongoing. Our device gives the pulse-like stimulation, the same as the 1-2-1-2.”

The Moment Device comes with an app, which isn’t necessary but can be used to analyse how patients are doing. Patients can track how their symptoms are affected by the device, and it helps to provide transparency and peace of mind for friends and family. If symptoms worsen, the app can provide important data for doctors to adjust the medication plan accordingly.

Patients can use the app to set up regular reminders to take medication. These reminders are then issued by a vibrating sensation on the device itself.

“This really came about by talking to people with Parkinson’s –  many don’t carry a phone around so having a reminder via app is useless. The device is really helpful because it gives you an alert but only you’ll feel it,“ Jung explained.

Jung and co-founder Pierres believe that the combination of their skills – design and medicine – has enabled them to create an effective product. Pierres’ medical background enables the device to work scientifically, whereas Jung makes it user-friendly and aesthetically pleasing.

“We bring different benefits to the product. He’s really objective and doesn’t believe anything unless he sees it himself – he has to study the clinical background. I’m much more positive and I do believe when people say it helps them,” Jung said.

“He has to really evaluate everything, but it means there’s a really strong scientific theory behind the device. That’s important, because we never want to give false hope.”

Finding belief in their business abilities

The team at The Moment Device had predominantly worked in research in the past, so it was initially hard to imagine running their own business.

“We said to our non-executive director that we weren’t sure if we were the right people for business. Our vision was really strong but we didn’t know much about the business side,” Jung said.

“He kept asking, ‘what do you think founders are?’. He reassured us that all you needed to be a founder was a strong vision. That was my biggest challenge – going out of my comfort zone. With The Pitch, I never imagined being able to stand in front of that many people and pitch.”

Jung didn’t expect to get as far as they did. Other startups were already making revenue and she was “completely shocked” when The Moment Device won.

“At The Pitch Final, I’d never stood up in front of that large of an audience. It was a big crowd. But it really felt like The Pitch team were there to support us – at other startup competitions, you just feel like you’re being analysed all the time. That was quite unique.

“When we won, it felt like everyone thought what we were doing was important, so we should carry on. It was like they were clapping for us to keep on going. It’s challenging to learn business, so it was a really big encouragement to continue.”

Jung and Pierres aim to release the device by Q3 2020.

“We don’t have forever. We believe people will eventually find a cure, but we want to help people in any way before then.

“There’s a clinical trial that will take place early next year, run by doctors at the hospital. We’re also running some in-depth user testing in January, which we’ll design with neurologists and Parkinson’s specialists. It’ll last about one to two weeks and we’re recruiting for it now, so get in touch if you know anyone who might want to take part!”