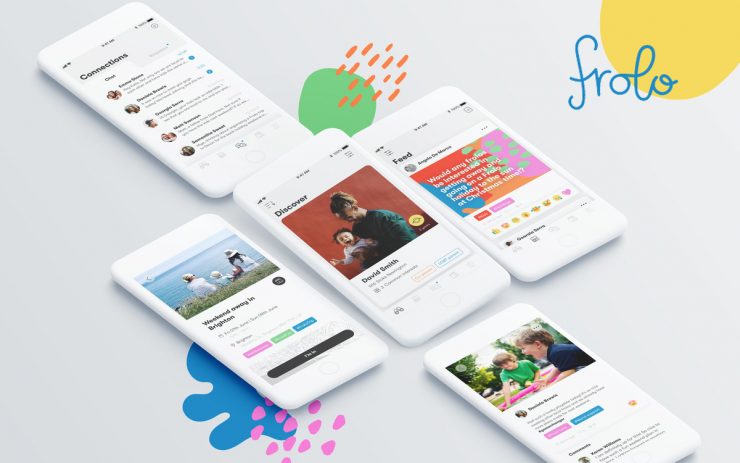 How Frolo went from idea to app in six months

Sometimes you come across an idea that’s so perfect, so simple and has so much potential that you’re immediately excited. For us, Frolo was one of those ideas.

When we first met Zoë Desmond – the founder of Frolo – and heard her talk about her vision, we were instantly sold.

After separating from the father of her son, Zoë found one particular area the hardest to deal with. It was something that was rarely spoken about in everyday conversation, but now defined her foreseeable future – being a single parent.

When speaking to the Standard, Zoë said:

“I didn’t know any other single parents in my life – none of my friends and family. I began to dread the weekends, I would start to panic about how to get by and fill the days. Then there was the guilt of not being able to be my best self for my son, not wanting to impose on friends and family, on their family time.”

Looking to extend her community, Zoë set up an Instagram account dedicated to creating a community of single parents. The account was an instant success and currently has over 6,000 followers . It provided Zoë with the impetus she needed to turn her idea of a single parent community into a reality.

It was at this point that Zoë approached us. She wanted to build an app that would allow users to find and connect with other single parents in their area, share their stories and feel part of something genuine and real.

We jumped at the chance and took the app from ideation to product launch in six months flat. Here’s how we did it.

From the earliest conversations, we knew we needed to adapt the Frolo brand to suit the digital platform, on both the app and website. We needed to create a space that was inclusive, positive and celebratory of single parents.

A strong brand won’t necessarily make or break a business, but it can go a long way in wordlessly communicating values and attracting your tribe.

We used a bright colour palette made up of strong colours throughout the spectrum, with lots of white space to create a clean, uplifting feel to the brand.

One of the distinguishing elements of the brand is a pattern made up of different shapes overlaid on each other. We deliberately designed the shapes to be non-uniform and fluid. They represent the idea of breaking outdated, conventional stereotypes of families and parenthood, and embracing the many different ways families operate.

The tech we used

A founding principle of Frolo is inclusivity, so Zoë wanted to make this app available to as many people as possible, regardless of device.

We built Frolo using React Native. React Native is a hybrid technology that allows you to code your app once, but for both iOS and Android at the same time. The biggest benefit here is that it allows you to use one developer for the job (or two developers for increased efficiency). This ultimately saves on time and therefore project cost, which we pass on to the client.

Once the app was ready, we wanted to tap into the engaged audience Zoë had built up on Instagram. It meant she could hit the ground running when the app was launched. To do this, we created a Founding Member’s app, where we invited members to join a beta version in exchange for a reduced membership fee further down the line.

This worked incredibly, as it meant the most engaged community members were able to get exclusive access to the app. When we launched the full version, it also meant we already had 2,500 wonderful (and active!) users. Nobody wants to join a social app with no people on it!

Another huge benefit is that we had an active testbed of app users. We invited them to email the support email address about any bugs they noticed, give feedback on what they did or didn’t like about the app and let us know what features they’d like to see in future.

Nothing beats direct feedback from your user base, and if there’s one thing you should take away from this story, it’s that. Never underestimate the importance of your brand’s communication being a two-way street.

We have continued engaging with users in this way, which has had such a positive impact on the development process post-launch. Now, we release monthly app updates. All of these updates are informed by the feedback from an engaged user base, meaning the app continues to deliver value to those who use it.

We built a robust analytics dashboard so Zoë can see all the relevant metrics. This includes user growth over time, drop-offs in the registration process and data on how the app is being used. The metrics further inform updates to improve the user experience on the app and allow us to make data-informed decisions on how to attract and keep members.