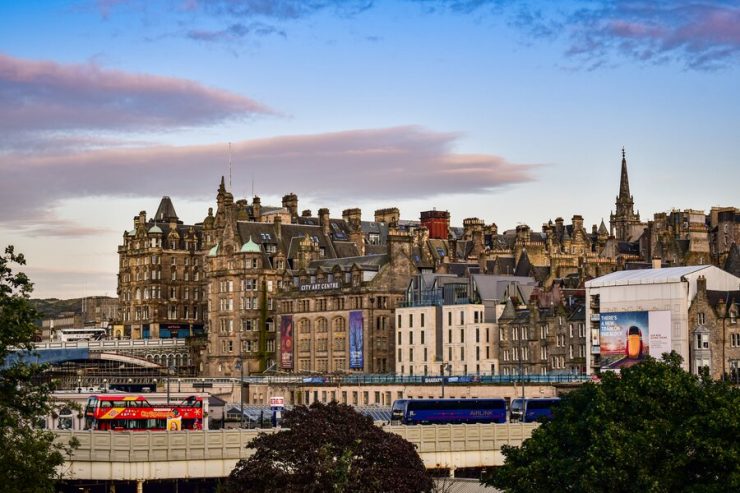 How Edinburgh became a major hub for tech and innovation startups

This year, we’re bringing The Pitch to some brand new cities across the UK. In addition to our regular semi-finals in London, Bristol and Manchester, we’re excited to announce our first new semi-final: Edinburgh.

Edinburgh has long been on our radar as one of the fastest growing hubs for tech and innovation startups. Tech giants Skyscanner, FanDuel and FreeAgent all started there, but now there’s a generation of new businesses snapping at their heels.

In 2021, a Barclays report named Edinburgh the best place to start a business outside London. It’s home to the largest number of high-growth startups outside the capital, with an estimated 621 businesses based there – 280 of which are tech companies.

The same report estimated that investors have made £940m in total equity investment in Edinburgh tech businesses since 2011.

With that in mind, we look at some of the driving forces behind Edinburgh’s growing startup ecosystem and a few startups to keep an eye on into 2023.

The rise of university entrepreneurs

In the last decade, we’ve seen universities pouring investment into entrepreneurship programmes. This works too – graduates with university-backed startups have made it through to The Pitch Final every year in recent memory.

It’s no coincidence that Edinburgh’s startups are thriving with robust support schemes at the city’s universities. The number of student-led startups has been consistently growing, before hitting new heights last year.

In 2020-21, students and recent graduates of the University of Edinburgh launched 100 startup companies in a single year. It’s the first time that milestone has been reached at any of the top 24 universities in the UK.

Startups to watch include:

There’s a wealth of support on offer, both at universities and across the city. Schemes provide everything from mentoring and investment workshops to funding and office space.

The Venture Builder [University of Edinburgh]

The Venture Builder gives 20 innovative startups the chance to join its incubator programme, which aims to develop and commercialise academic entrepreneurship.

A programme of mentoring and support for students and recent graduates who have an innovative idea that they would like to develop further.

A 12-week programme that helps early-stage startups work on their business idea and get investment ready. Applications for its 2022 cohort are closed, but keep an eye out for this next year.

Other startups and scaleups

Heriot-Watt University’s Business Incubator is described as “a safe harbour for startups to validate their ideas and identify suitable markets”. Anyone can apply to join, providing they aren’t a full-time undergraduate or taught postgraduate.

A three-stage accelerator programme that gives early-stage entrepreneurs funding, coaching and support to develop a successful business model. The programme has helped a range of startups so far, including:

You can search the full list of Scottish programmes, incubators and communities here.

In Startups.co.uk’s analysis of the top UK cities to start a business in 2022, Edinburgh was named the best city for talent. It reported that Edinburgh has the highest percentage of highly skilled workers, with 65.4% of the population having a Higher Education Certificate or above.

As anyone who’s tried to hire for a startup will testify – it isn’t easy. You need talent, drive and ambition, but you also need people who aren’t afraid of the inherent risk that comes with working in a small business.

This is why so many startups that have come through The Pitch have built their team around students. Being close to a hub of skilled people – who have plenty of free time and are eager to learn – is hugely beneficial in those difficult early stages.

The number of second-generation entrepreneurs

The availability of talent isn’t just helping startups at a junior level either.

As FanDuel co-founder Nigel Eccles pointed out in an interview, there’s a growing number of second-generation entrepreneurs within the tech ecosystem.

“These are people who have been involved in previous startups, whether they’ve been successful or not, and are keen to use their knowledge to try it again. It’s something that Edinburgh didn’t have maybe 10 or 15 years ago.

“But now you have a group of experienced entrepreneurs who understand what’s required to start a company and have the desire to do it again,” he said.

“It’s been really exciting to see these people helping to establish new companies and disrupting different sectors across the market. I truly believe the more success Scottish startups have, the more the world will start to consider Edinburgh alongside established tech hubs like LA and New York,” he added.

Based in or around Edinburgh? Apply for The Pitch

The Pitch is a free competition that gives startups the support to grow and the platform to raise investment. And it works – The Pitch 2021 finalists have already raised £1m+ through our connections.

We’re holding our first ever regional semi-final in Edinburgh this year, where you’ll have the chance to pitch to investors and entrepreneurs. Make it through and you’ll head to The Pitch Final, where there’s a £5k cash prize up for grabs.

Meet Rowdy Kind, The winner of The Pitch 2022